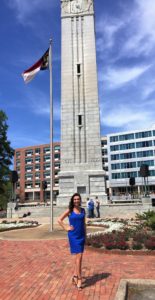 There are lots of things you expect to find in busy downtown cities…traffic, noise, pedestrians, restaurants and even shopping. And in state capitals, you even expect to find courthouses, offices and parking garages. But in downtown Raleigh, N.C., you might be surprised to find a small piece of history in the shape of a belltower.

The NC State University Memorial Belltower was originally built as a tribute to the school’s alumni who died in World War I. The cornerstone was laid in 1921, and after completion in 1937, it quickly became a landmark symbolizing inspiration to students, alumni and visitors alike. The belltower, which originally cost about $150,000 to build, is made of 1,400 tons of granite on a 700-ton concrete base. It stands more than 115 feet tall and is known as a “legend in stone.”

I was excited to explore this magnificent belltower and learn more about it during a recent trip to Raleigh.  While taking a few “selfies” in the hot, summer sun that Raleigh is somewhat famous for, I was approached by a gentleman wearing a “Wolfpack” shirt who asked if I wanted him to take a picture for me, so as to get the entire view of both me and the belltower in the photo.

I thanked him profusely, explaining I would be writing about the visit, and it would be a nice photo to have. He then surprised me by asking if I’d be interested in seeing the inside. My reply was quick. “The inside of what?”  His laugh was even quicker. “The inside of the belltower,” he chuckled. 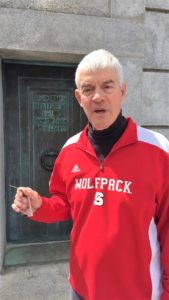 And just like that, Dr. Tom Stafford introduced himself to me as “the man with the keys.” Dr. Stafford, a former vice-chancellor at the university, now volunteers his time to give tours of the memorial belltower, and he just happened to be walking by when he noticed me. (The 5” heels and dress I was wearing probably helped.)

A few students from neighboring Duke University were also there taking photos and videos, and he invited them to come along as well. Our enthusiasm was evident, as we all understood we were getting a rare, and unplanned, glimpse into a piece of history. We followed Dr. Stafford up the steps and to a small door. Then… he handed ME the keys!

Inside was small, but well-lit. There was a bench for meditation (I hope the next person to enter the belltower is still enjoying my sunglasses I left lying there) and a very large plaque engraved with names.

Dr. Stafford explained there are 35 names memorialized on that plaque – and 34 of them are NCSU alumni who died in WWI. But one name was mistakenly added of someone who had not yet died (Dr. Stafford prefers to say he was “still alive.”)  The name George L. Jeffers has been altered on the plaque to read George E. Jefferson, and that name now serves as a symbol of those unknown soldiers from NCSU and elsewhere who perished in the war.

More than 90 years after it was first erected, the Memorial Belltower at NC State University still stands as a symbol of hope to all who see it. On occasion, it is lit in red to celebrate the university’s achievements such as commencement, Founder’s Day, and even ACC wins, as well as on certain veterans’ holidays.

After retiring from his role as vice-chancellor, Dr. Stafford is not only “the man with the keys,” but also the man who gives tours and offers historical tidbits to unsuspecting tourists who are lucky enough to happen upon him.

If you’d like to see the inside of the Memorial Belltower, Dr. Stafford will be giving his next tours on October 1. The tours are free, but due to their popularity, advanced registration is required.