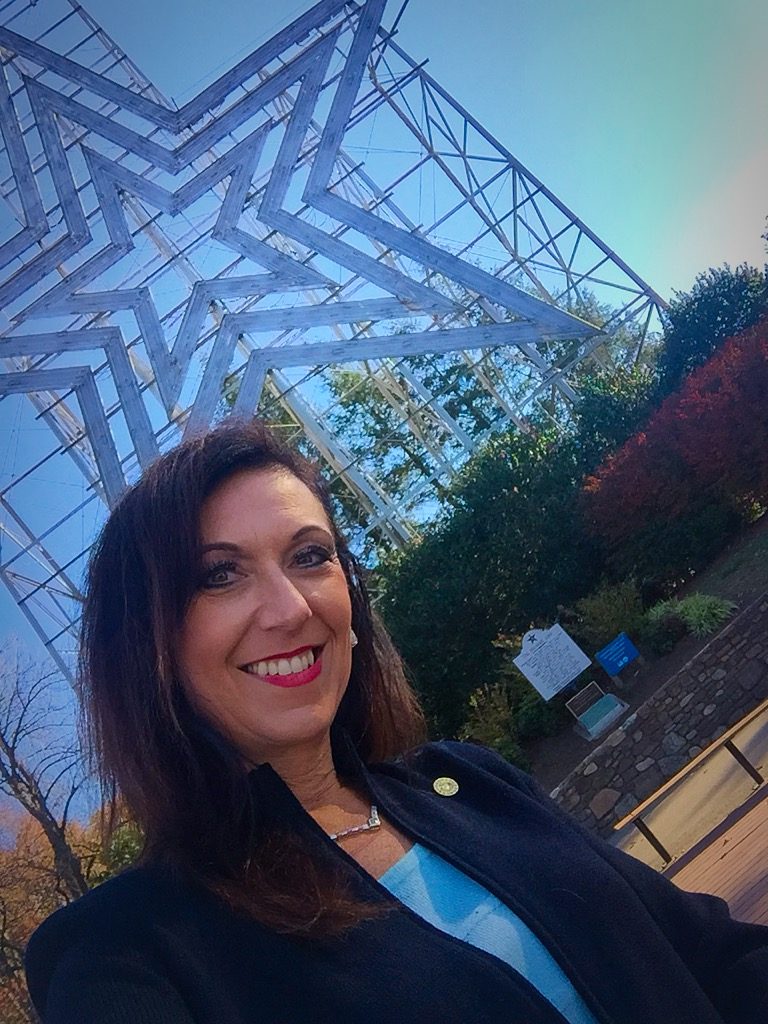 Anytime you can visit something prefaced with “the world’s largest…,” why wouldn’t you?  I had that opportunity recently during a visit to South 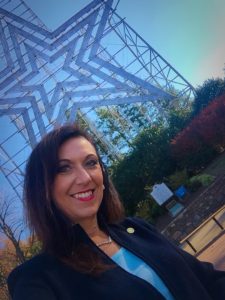 Just a half-day drive from Western North Carolina/Upstate South Carolina, the Roanoke Star is perched atop Mill Mountain. Built in 1949, it is listed on the US National Register of Historic Places and is the world’s largest freestanding illuminated man-made star. (Say that three times fast!)

It’s original purpose was to kick-off the year’s Christmas shopping season. Over the past 60+ years, it has featured several different colors of lights – red, white and blue (for the bicentennial celebration in 1976), all red (to indicate a traffic fatality), and all white (in honor of the Virginia Tech massacre in 2007).

Also known as the “Mill Mountain Star,” the structure is more than 88 feet tall and has more than 2,000 feet of neon tubing. It’s a short drive up the mountain to see it up close and in person, and once you get there, don’t miss the views of the city from the overlook. 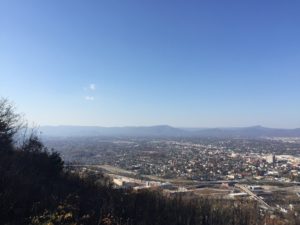 Fortunately, exquisite scenery (and a zoo next door-that is NOT open off-season I learned the hard way) is not the only thing Roanoke offers. There’s also something for those interested in transportation, the arts, history and shopping.

The Virginia Museum of Transportation has been open more than 50 years, and while it represents all modes of transportation, it focuses on the rich traditions of railroads in Roanoke. It even features the largest collection of diesel locomotives in the south.

During my recent visit, I spent an entire afternoon exploring the Taubman Museum of Art in downtown Roanoke with a friend who lives there. At first glance, t

his beautiful, contemporary building appears out of place in the center of the city’s historical district.  But inside is a pleasant surprise that perfectly complements the past, present and future of the city.

Featured artists rotate on a regular basis, while permanent collections by internationally-acclaimed artists and experiences aimed at hands-on children experiences add to the charm of this free attraction.

It was only fitting that both Judith Lieber handbags (Earthly Delight) and Jane Weitzman shoes (Art & Sole) were featured exhibits during my recent trip. Looking ahead, a return visit may be necessary to experience the new “Tastings At The Taubman” events that will celebrate my second favorite luxury after shopping – wine and spirits!

A beautiful drive up the Blue Ridge Parkway made getting there half the fun. And since I only had a few hours to explore, I definitely plan to return soon to see even more of what the “Star City” has to offer! 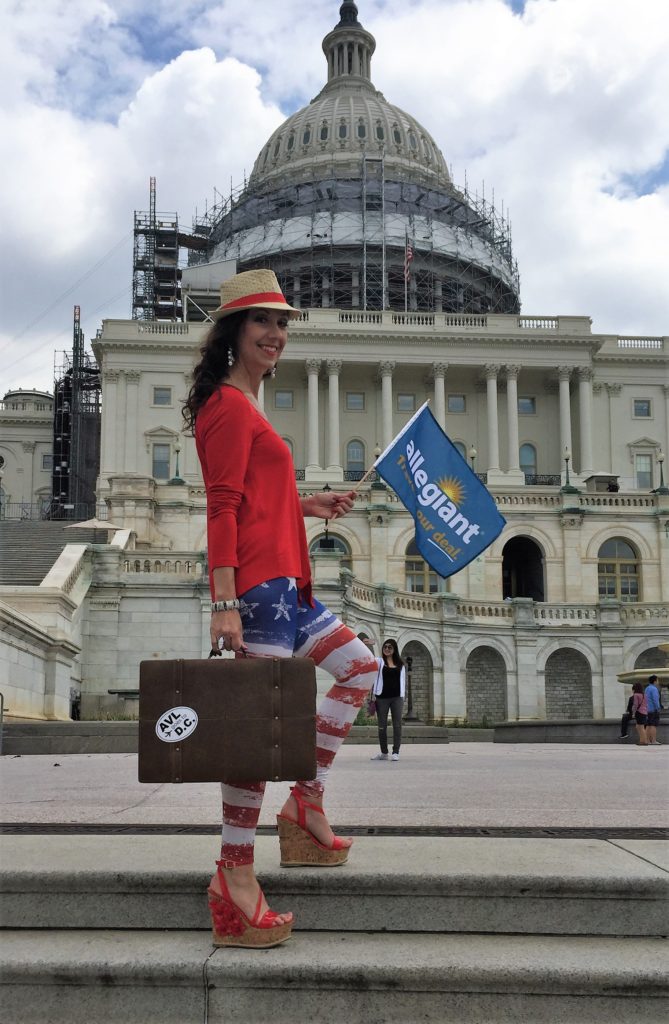 If the idea of the cherry blossom scent in April and a view of moonlight over the Washington Monument gets you excited about a visit to Washington, D.C., don’t let the fear of navigating some of the nation’s busiest airports keep you at home. There’s good news for travelers in the Carolinas who want lots of convenience without lots of costs.

The Asheville Regional Airport (AVL) recently began a new non-stop, direct flight to the D.C. area via Allegiant Airlines. The twice-weekly economical flight arrives and departs from Baltimore-Washington International airport (BWI), which is only a 30-minute train ride into Union Station. Originally scheduled as a seasonal service May through August, the popularity of this flight already has it extended through early January 2017.

This flight meets three of my essential criteria for flexible and fun travel – convenience, cost and calendar.  AVL is centrally located in Western North Carolina and easy to get to from Upstate South Carolina and even the Charlotte area. Because Allegiant makes travel affordable and convenient, it’s possible to spend less on two round-trip tickets (plus train rides) than a single full-priced one-way ticket on another airline. And with two flights per week from AVL to BWI, you can easily enjoy a long weekend or 4-day mini-vaca 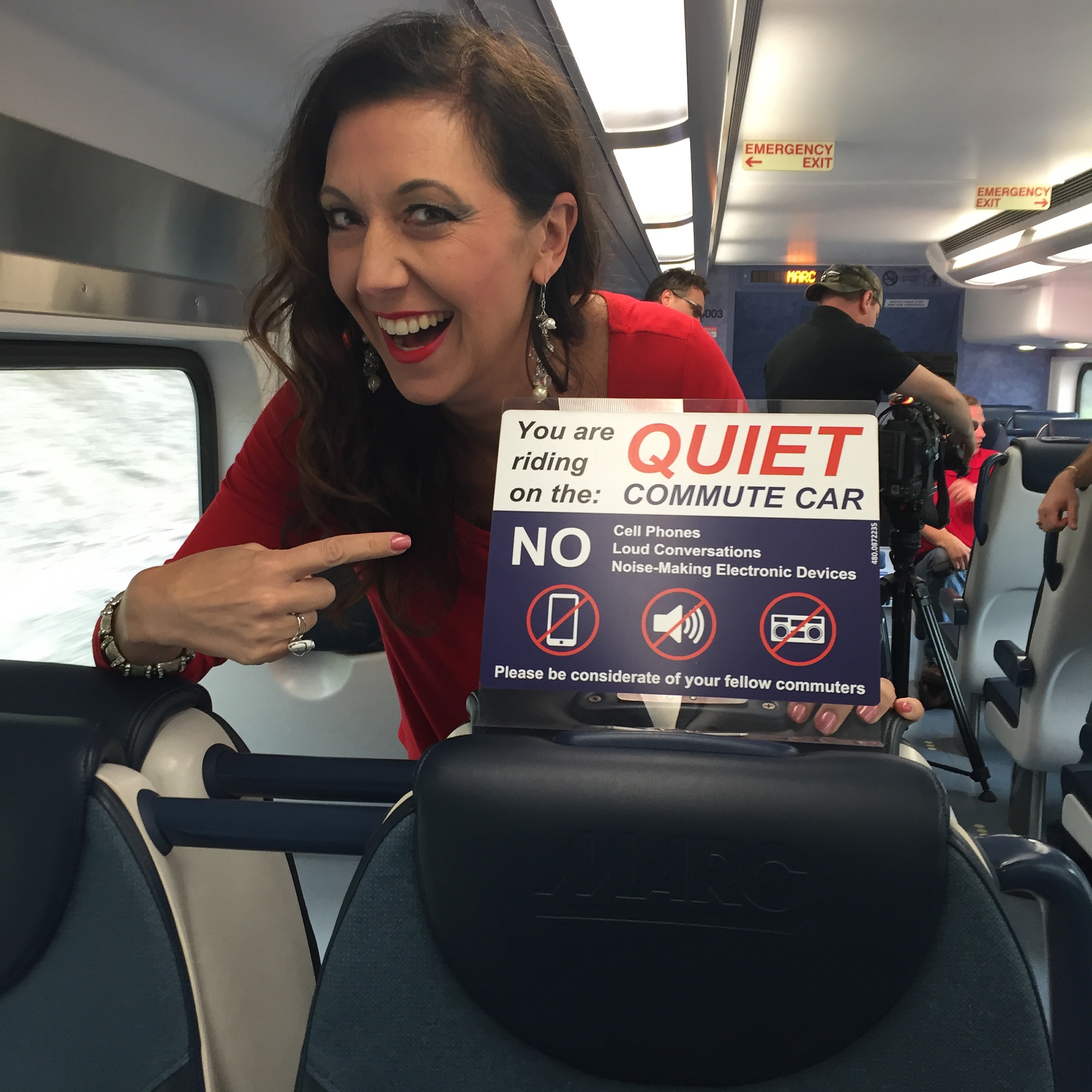 Why not just fly into Reagan or Dulles, you ask? The convenience is certainly one of the top reasons, but there’s also the adventure! The short train ride from the station located just outside BWI into Union Station is brief, comfortable and user-friendly. Once in Union Station, it’s easy to catch a cab (or Uber) to your hotel or even walk to the Capitol Building for a photo opp, as I did just a few months ago when I took the inaugural flight.

I can think of no better way to visit one of our nation’s most delightful cities than by combining planes, trains and automobiles! And with so many things to do 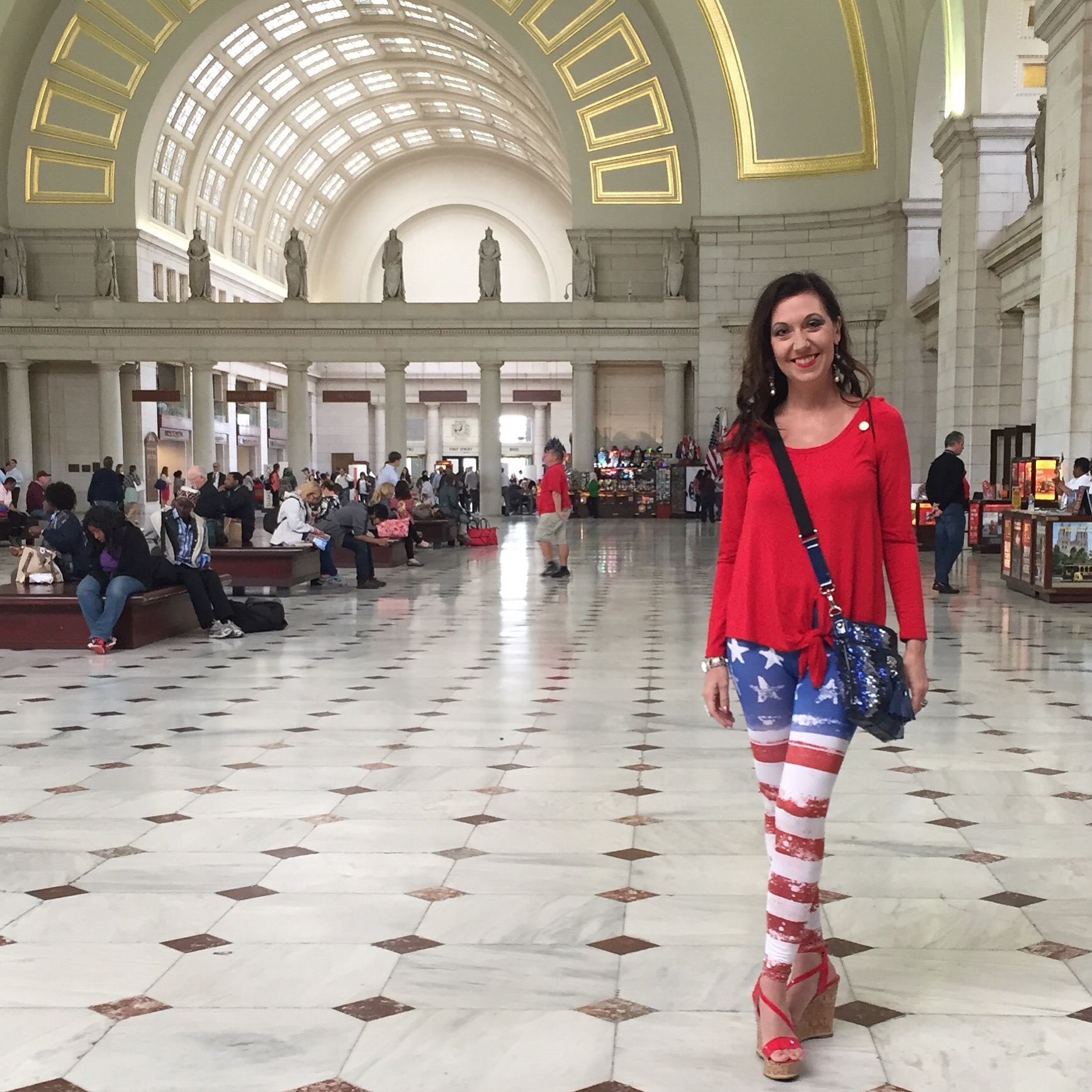 in the Baltimore area as well, it really is a win-win for the discerning traveler. (If you time it right next summer, you could hit two major league ballparks in the same trip!)

What are your favorite things to see and do in DC? There are so many to choose from…from historical to culinary to educational to athletic to cultural…and everything in between!

We’re fortunate to have some great airlines and flights available in Western North Carolina. The Asheville Regional Airport, served by four airlines, offers daily flights to major hubs like Atlanta, Charlotte and Chicago, and non-stop flights to six Florida destinations and Baltimore.  There’s also year-round service to New York via Newark. (Have you 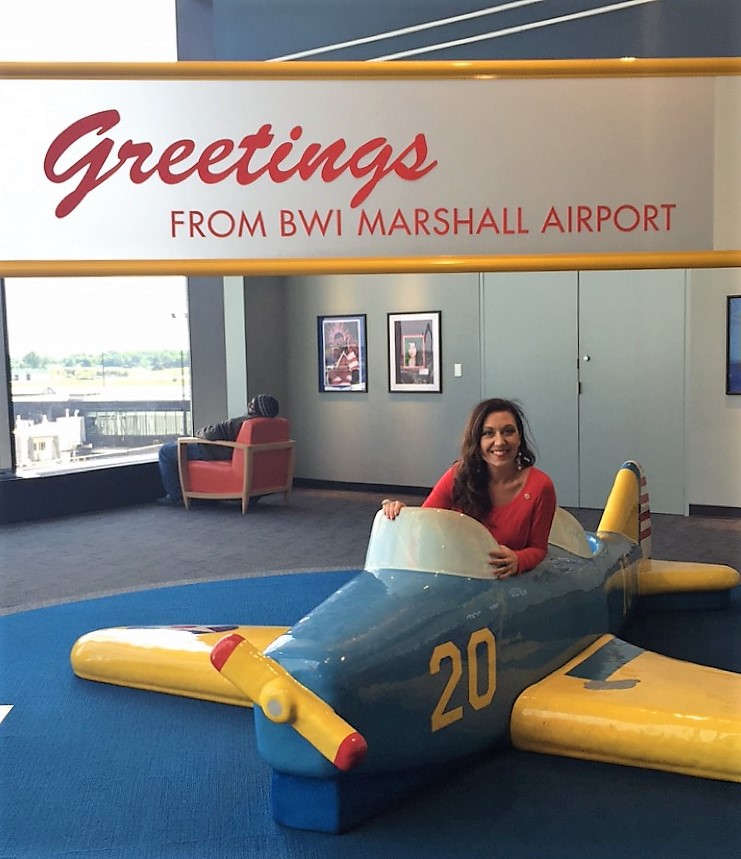 PS – you can also have a little fun exploring the airport in Baltimore like I did!  (see photo!!) 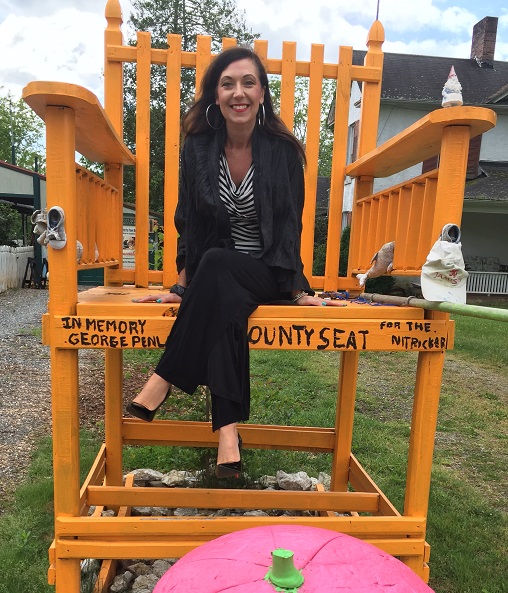